I want to introduce you to a different way to use a Resource Page. I have structured this section, to not only give you references that are easily accessible, but also to provide a mini-course in the development and practice of TSM Psychodrama and the Therapeutic Spiral Model. If you use the resources as they are offered, you will not only get a theoretical education in trauma work around the globe, but also learn about the Clinical Map of Internal Roles that were created in the Therapeutic Spiral Model from 1992-1995.

The theoretical foundations of TSM Psychodrama and the Therapeutic Spiral Model are given in order of development. TSM started from a personal love of classical psychodrama and training in gestalt therapy that, when intertwined with a PhD in Clinical Psychology resulted in the American Psychological Association’s Graduate Student Award for 1986 for my dissertation on Doubling. Today, TSM is supported by findings from the latest life-changing research in the neurobiology of trauma, attachment, and post-traumatic growth.

Together, theory, research, and practice of TSM Psychodrama show an innovative and effective way to use psychodrama clinically, without fear of re-traumatization or too much emotion when working with vulnerable people, such as those with PTSD. The Therapeutic Spiral Model provides the first ever clinical map of internal roles to guide you as you use psychodrama and other experiential methods with trauma to help to maintain safety and increase effectiveness.

History of TSM Psychodrama and The Therapeutic Spiral Model

The Therapeutic Spiral Model (TSM) truly began in the “psychodrama basement” at St Elizabeth’s Hospital. I was at the end of my NIMH (National Institute for Mental Health) funded year long internship in psychodrama and group psychotherapy. It was 1981 and PTSD had not even made it into the DSM at that point. Yet one day on the psychodrama stage while I was directing, one of my peer interns, was triggered into a flashback and we were back in the jungles of Vietnam that was so real you could smell the gunpowder and burning flesh. As I directed that day, I saw the power of psychodrama to heal this one man when held in the container of the spontaneity and creativity of our like-minded group, which had been together for a year. It clearly sowed the seed of my life long endeavors to make classical psychodrama safe for everyone who has experienced trauma in their lives.

Ten years later, I had a Ph.D. in Clinical Psychologiy and was a newly certified Trainer, Educator, and Practitioner in Psychodrama, Sociometry and Group Psychotherapy. The Therapeutic Spiral Model developed through a small group of Board Certified psychodrama clinicians and trainers who met from 1992-1995 in Charlottesville, VA and Black Earth, WI. We were responding to a grassroots call for a clinically safe system of psychodrama for trauma treatment as PTSD became diagnosed in treatment settings and clinical psychodramatists faced increasingly vulnerable people seeking help.

This group of dedicated clinicians co-created the first clinical map of the internal roles of people who had experienced trauma, and prescribed the roles needed for living a life of spontaneity and creativity. Since then, many of our clinical action interventions have been researched and found to significantly decrease anxiety, depression, and symptoms of PTSD. TSM Psychodrama has been taught in 35 countries as of this writing, and has found cultural adaptations easy and natural because it is experiential therapy. Action does speak louder than words.

Today, noted neuroscientists call for safe experiential therapies as a treatment of choice for a variety of mental health difficulties, and specifically for PTSD. Due to the brain changes that are now documented from developmental trauma, acute violence, addiction, or long term global disruption, action methods are now seen as the best hope for post traumatic growth. They can focus on increasing resilience, self-regulation, and repair of attachment wounds in the here and now through real interpersonal interaction. A far cry from talk therapy!

Hundreds of physicians, psychologists, social workers and other clinicians; anthropologists, educators, social activists, practitioners, performers, artists, and community workers have learned the Clinical Map of the Internal Roles of the Trauma Survivor around the world. Together with the many protagonists and groups who came seeking relief from Post-traumatic Stress Disorder, dissociative and addictive disorders, depression and anxiety, we co-created the Therapeutic Spiral Model and TSM Psychodrama to treat PTSD in the global community.

TSM is an innovative and inspirational method of experiential change used in leadership building, resilience training, prevention, education, community work, business, and beyond.

The Therapeutic Spiral Model was developed between 1992-1995 from a grassroots call for more clinical safety in working with increasing numbers of traumatized people using classical psychodrama. It was originally developed in clinical settings working with people who were diagnosed with Complex PTSD, Dissociative Identify Disorder, Borderline and other Personality Disorders. Often people, who like the first patients in psychodrama, found themselves on the margins of traditional cognitive behavioral treatment and it’s failure to cure these mental health problems.

As you can see in the wide range of publications from Dr Kate and other TSI Trainers and colleagues, TSM has been shown to be effective with a wide range of psychological disorders, including PTSD and addiction. The Clinical Map of Internal Roles has also been used in a wide range of clinical and non-conical settings as is shown in Hudgins & Toscani (2013).

Spontaneity and Creativity is What We All Need

While the Therapeutic Spiral Model was firmly defined by 1995 through clinical practice, the last 20 years of research on the neuroscience of the brain has expanded exponentially. Neuroscience proves what classical psychodrama and TSM Psychodrama have long known through experience. The brain actually changes when people participate in new behaviors in experiential psychotherapy, rather than simply discussing them in talk therapy.

The main legacy from classical psychodrama that drives TSM is that a state of spontaneity and the production of creative action solutions is the goal of all psychological change!

J.L. Moreno’s 1953 book Who Shall Survive?  begins with the bold statement that “only the spontaneous will survive.”  There can be no better answer to the ills of today’s world that create cycles of never-ending violence and trauma than learning how to live as spontaneous and creative beings of life.  Meet Zerka T. Moreno, the co-founder of psychodrama, as she filmed her final thoughts in the last decade of her life here.

To look at the history and development of psychodrama, you can see that the core theory has been that we are spontaneous and creative human beings. In terms of trauma work, that translates into building resilience in order to go to the depths of psychological and possibly neurobiological healing. Long before PTSD was a diagnosis, the Moreno’s (J.L. and Zerka) and others worked with vulnerable populations, often people that other psychiatrists and psychologists of the day had given up hope on. It has been my personal gift to work with many of these original trainers directly and to have them influence TSM Psychodrama, especially in my 25 year relationship with Zerka T. Moreno.

As you can see, there is a wealth of history, theory, research, and practice about classical psychodrama from the early 1900’s to the present. It is the seminal action method of experiential change.

TSM psychodrama adds the Clinical Map of Internal Roles for people who have experienced trauma to guide the development of spontaneity and creativity, as well as to treat trauma at its deepest levels. TSM developed the Prescriptive Roles to establish a sense of internal safety, resilience, and containment. The Containing Double or the Self-supporting Voice, has been researched and shown to work across cultures, populations, and settings. In turn, this allows people to directly address the TSM Trauma Triangle with it’s unique internal role of the Abandoning Authority, in addition to the roles of Victim and Perpetrator safely and effectively.

While TSM developed through the co-creation of many certified psychodrama trainers, clinicians, and protagonists from 1992-1995, a 1996 brain imaging MRI study on the neurobiology of trauma showed that talk therapy was not adequate to reach the changes in they were seeing in the right brain. Since then, exponential leaps in interpersonal neurobiology show increasing scientific support for experiential methods as the treatment of choice when working with traumatized people.  Here are a number of resources that the Therapeutic Spiral Model and TSM Psychodrama have drawn on over the years to support it’s clinical findings that led to the development of the Clinical Map of Internal Roles.

While research connecting the seminal action method of experiential psychotherapy, classical psychodrama, and its adaptation such as TSM Psychodrama, is still needed, the TSM Clinical Map has operationalized it’s 15 internal core roles for training and research. The Containing Double has been shown to decrease anxiety, depression, and symptoms of PTSD in as little as three individual therapy settings, and has been written about in many countries.

Please see our TSI International Certification Program in Trauma Therapy using the Therapeutic Spiral Model to see how we have incorporated the basic concepts of interpersonal neurobiology and attachment theory into our work as certified psychodrama trainers and practitioners. Our certification is 8 weekends long with supervised practice and opportunities to be on Action Healing Teams. Come join us to learn the Body Double and the Brain in Action when we teach our own course on the Neurobiology of Trauma. Learn how to walk the TSM Trauma Triangle and find the spontaneity and creativity to build your own Appropriate Authority to walk off of it with ease. Most of all, find your Sleeping-awakening Child and begin to live life fully!

Since TSI started certifying people in the Therapeutic Spiral Model in 2000, we have trained physicians, psychologists, social workers, therapists, addiction counselors, educators, social activists, performers, expressive arts therapists and others who use experiential method of change into today’s world. Many of them have written professional articles on their use of TSM in their own countries. Please see this for a partial list of people who have been certified in TSM as Trainers, Team Leaders, Assistant Leaders, and Trained Auxiliary Egos.

The architecture of mindfulness: integrating interpersonal neurobiology and the Therapeutic Spiral Model

An Interview with Adam Blatner: Drama in the Service of Education

Adam Blatner, MD, TEP, San Francisco Bay Area on the rationale of the use of Morenian methods

Understanding the Effects of Social Environment on Trauma Victims. Announcing the upcoming tenth edition of Kaplan and Sadock’s Comprehensive Textbook of Psychiatry, edited by Benjamin J. Sadock, Virginia A. Sadock, and Pedro Ruiz, scheduled for publication in early 2017.

Why is Psychodrama Powerful by Edward J Schreiber

What is Psychodrama?  By Marcia Karp

Ways to Connect with TSI

Carnabucci, K., & Ciotola, L. (2013). Healing eating disorders with psychodrama and other action methods: Beyond the silence and the fury. London: Jessica Kingsley Publishers. 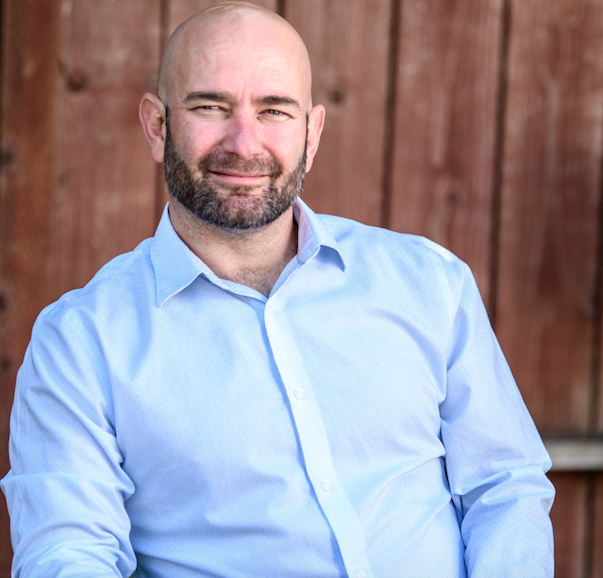 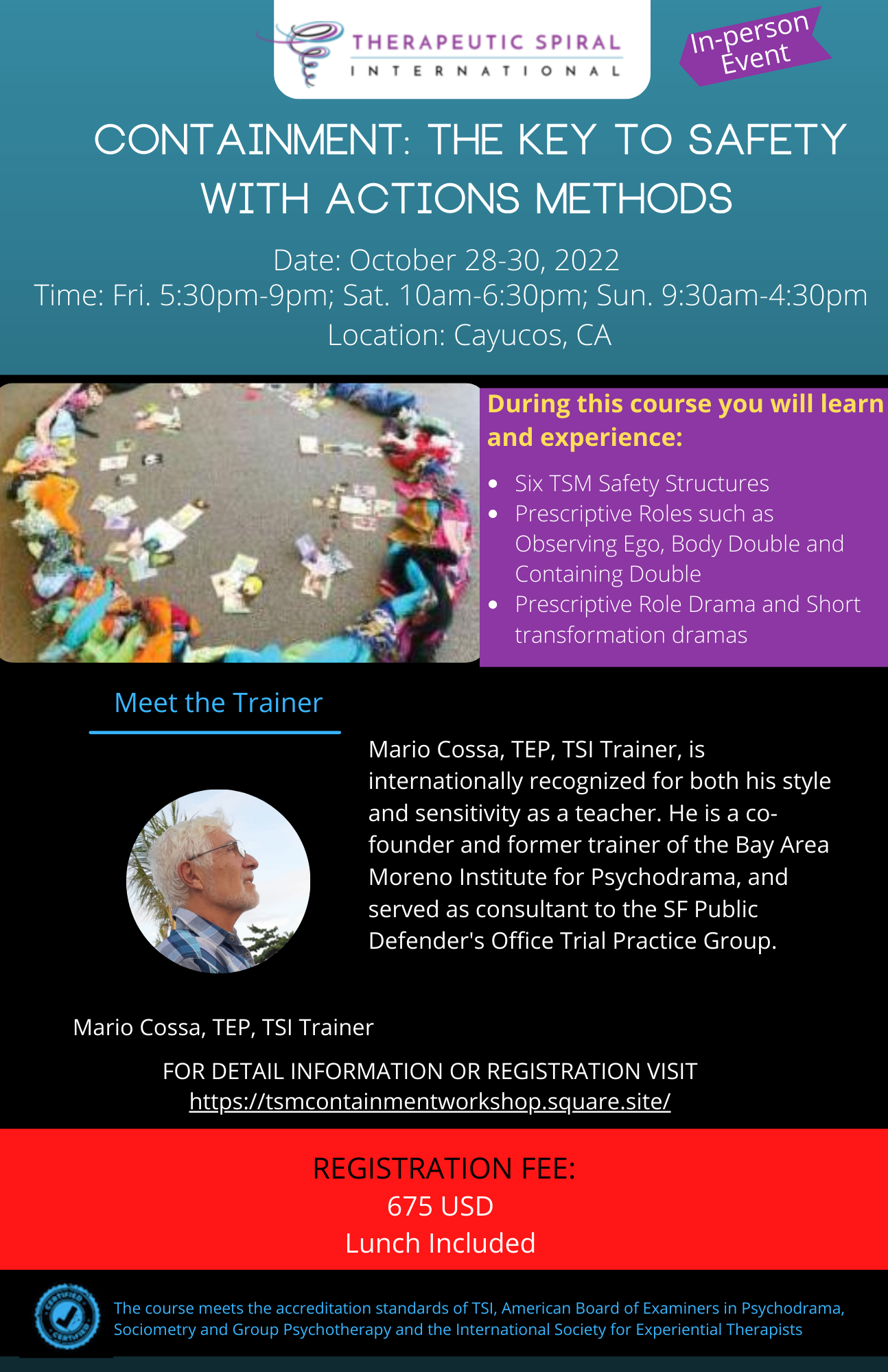 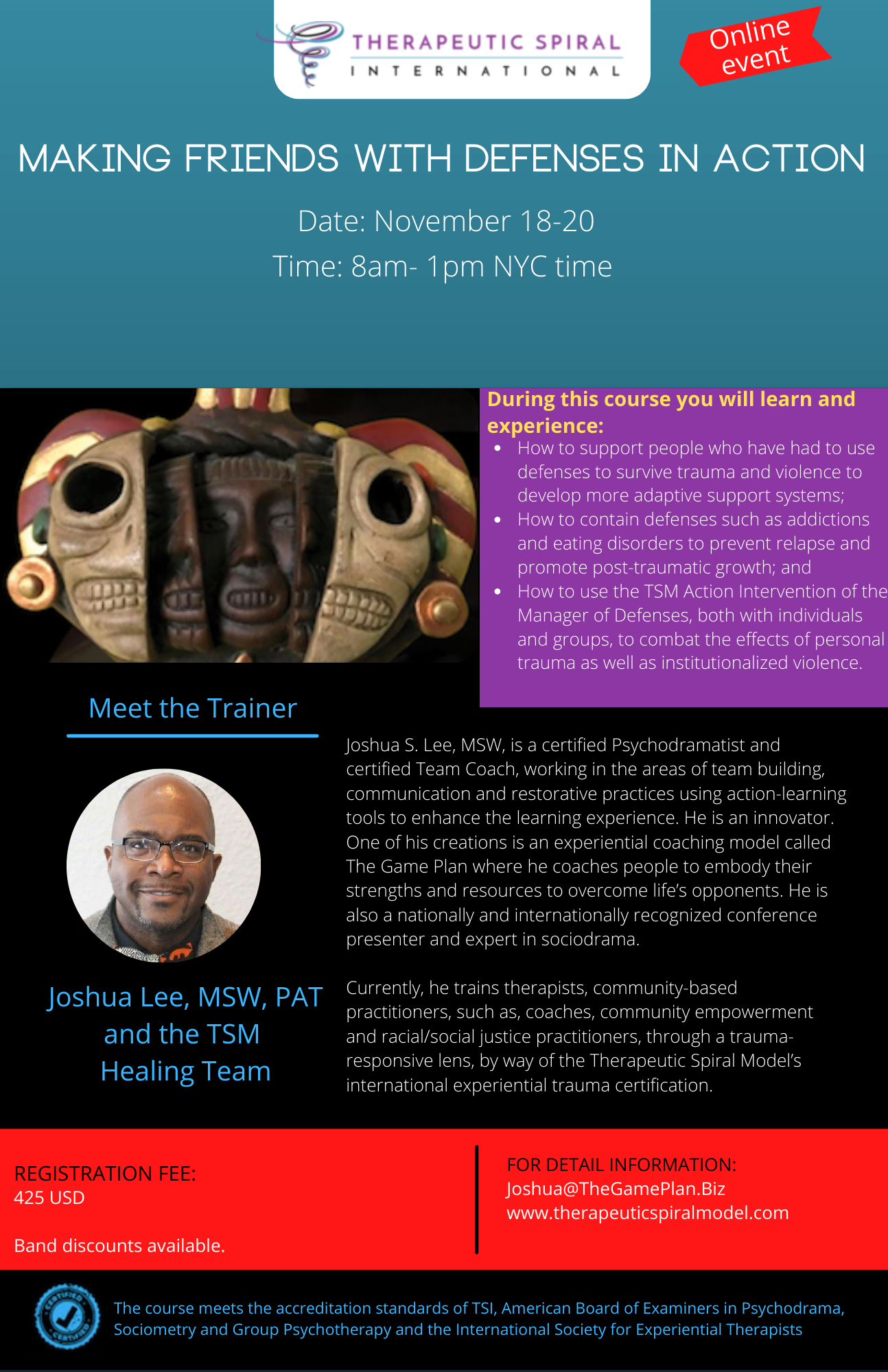