BACK TO TSI TRAINERS

TSM, TSIRA, CD, AL—these are some of the original letters in the alphabet soup that is TSM—the ones that I was involved in co-creating and co-developing as a member of the original TSM team.

The year was 1991. I had previously heard of psychodrama; had witnessed action methods. What I had seen, though, left me cold and wary. Yes, the action was alive, was vibrant, was cathartic—but did not feel right, did not feel safe, with negative reactions hours after groups ended. But in 1988 I attended a demonstration given by Zerka Moreno at Omega Institute. Her simple presentation was sublimely powerful and I was intrigued. So, when a close friend suggested a new psychodrama training group in Richmond, I went with him. Kate Hudgins, brilliant, lovely and warm. And Milton Hawkins, friendly and open and dressed in slicker-yellow bibbed overalls—these were the trainers. While I had been involved in alternative therapies and healing methods over the years, my psychology and counseling education and training were fairly traditional. So, experiencing a fun and lively group with these two as leaders was a refreshing turn and I was hooked. What stands out particularly, these 26 years later, is how quickly individual and group issues emerged, how active the training and learning was, and how seemingly easy Kate and Milton handled all the sociometric (didn’t know that word then) concerns. They were non-threatened, centered, and I was impressed.

After several months, Kate asked if I would be an auxiliary ego in a group she was doing with trauma survivors. While I knew I could do auxiliary work, I was a bit concerned because I had never worked with an entire group of ‘abused persons.’ Kate’s support was invaluable and she reminded me that I was a good therapist, so all I had to do is put my clinical skills to work through whatever role I was asked to play. With those simple instructions, I understood the role of an auxiliary much more clearly: it wasn’t just playing a part in someone’s drama; it was about effective and pinpointed interventions through the particular role. Psychodrama became more real and I found that, working with the Surviving Spirits groups, my life as a therapist became more meaningful.

My theoretical background was Jungian, so I always viewed the action on stage as the inner workings of the psyche. When I did my first psychodrama, it was just as if I were in my own sandtray, and later developed a method of work called Sandrama. While many psychodramatists are intuitives and usually say they learn through action, my primary learning mode is through discussion. So after each group, after each drama Kate would direct, I cornered her and we had interminable discussions about what she did, the choices she, I, and other auxiliaries made, and the clinical reason for those choices.   It was from those discussions and processing that the main meal of TSM developed. We called it the Trauma Survivor’s Intrapsychic Role Atom (TSIRA), which is now being call the Internal Role Atom.

Kate’s method of directing, and indeed of training, is one of abundance and inclusion. She has always seen the entire group as part of the drama, so these Surviving Spirits groups were quite lively and might seem chaotic to more traditional psychodramatists and therapists. Yet, this apparent chaos is exactly what is going on in the brain and in the psyche of a person who has experienced trauma or even deep stress. So, rather than keep any part of the psyche (or internal role) off stage and quiet, Kate invited them in. Sometimes these roles were brought to the stage by the protagonist; sometimes they spontaneously developed from a clinical intervention, and sometimes a group member might pick up on a dissociated feeling from the protagonist and embody that role. To create order out of seeming chaos, we labeled the roles and began placing them into a structure that developed over several training groups and several years.

One example is the Containing Double (CD) that was the first role named. Based on clinical practice, we saw that the traditional double was not always necessary for the protagonist, but what WAS always necessary is what we called the Containing Double. This role developed spontaneously in a drama within a drama, when a group member was experiencing her own flashbacks. It was clear she needed no classical double, but did need to develop that part of herself who could maintain a semblance of calm and assurance even in the midst of frightening memories. The containing double is what I became—first a scared child, then a calm, reassuring voice that affirmed her fears, but encouraged her/us to move beyond them and be in the here and now. Eventually, Kate and I caught each other’s eye and, as double, I brought the group member into the present and Kate brought her into the drama as a support for the protagonist.  It was at that weekend, too, we developed the role of Assistant Leader (AL). This team role is not a co-director, but is essentially the director’s double and over the years has morphed into one with clear duties to aid the drama.

Through ensuing dramas, clearer safety structures developed, along with my introduction of art as a part of each group. These art projects—from sandtrays to collages to mask-making to dream catchers woven from reeds—were ongoing during the weekend and week-long groups, adding another dimension. The final project was always presented to the group and it was edifying to see each person gain more understanding trough their artwork.   These memories still warm my heart.

This vital period of growth—teaching, training internationally, writing—continued till 1997 when I moved away from Charlottesville and decided to pursue a life-long dream as an interior designer.  I went back to school and in 2000 moved to Philadelphia, my original hometown, and began working as a kitchen and bath designer in my sister’s company.  After a very successful 9 years, I decided to move back to Charlottesville—it was time for semi-retirement and the Blue Ridge Mountains once again called to me.

As I was piecing together my life in Charlottesville, one stitch was to rejoin ACAC, a fantastic health club, and it was in their women’s locker room that another path presented itself. It was Kate, and we literally bumped into each other. Recognition came a bit slowly—after 12 years—but we were able to meet and discuss the continuation of The Work.. This has always been our connection and I have dedicated this next stage of my life to continue to refine and teach and support Kate and other TSI trainers—because the TSM model is so rich, clinically sound, and applicable to many situations—well beyond therapy.

Francesca Toscani, M.Ed., TEP, was a Licensed Professional Counselor with a private practice in Charlottesville, VA for many years. Having a Jungian background, she is a published author, editor, TSI supervisor and trainer, and has conducted hundreds of workshops internationally on many themes. Francesca has had several professional careers, including teacher and interior designer. She is now semi-retired and living in West Chester, PA, with her husband, having returned to the Philadelphia area to be close to family. She continues in her work with TSI as supervisor, editor of the newsletter, and workshop design. She is also a book editor and can be reached at francesca.toscani@yahoo.com. 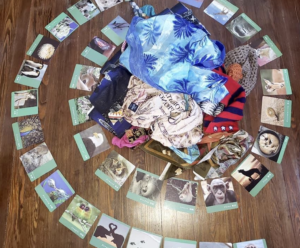 Click here to learn more and register for this event!
View Calendar
Add
Scroll to top